Wasps have a lifespan that lasts from spring to early autumn and they will vacate their nest at some point in late summer, early autumn. Once they have left, they do not return hence, if you are confident that the nest is completely empty, you can remove it, not forgetting to marvel at the intricate nature of it.

However, wasps do have an unfortunate habit of making their nests in the most unusual and inconvenient of places, including in an unused bed in the spare room of a home in the summer, without disturbance or interference, the nest can swell to huge numbers.

When this happens, and you, your family and pets face a direct threat from being stung, then the only option is to call in the pest controller!

Wasps do not like to be disturbed and, if the workers feel the nest is under threat from human intrusion (as well as other interference from animals etc.), they will send out a signal to fellow workers to defend the nest. This is when worker wasps leave the nest, ready to attack and will sting, indiscriminately. They can deliver several stings per worker wasp, a painful experience for the recipient.

Not all wasps make nests that are visible; there are some wasps that are ‘loners’, making their summer nest in the soil, away from human habitation. Again, they can pose a problem should they sting, especially if they feel under attack but, if left alone, they tend to go about their business without intruding on ours. 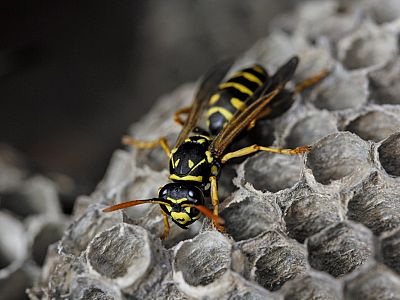